Prague Airport is advancing its social responsibility in respect of the environment and wants to achieve carbon neutrality by reducing the net carbon dioxide emissions from its operations to zero by 2030. The purchase of 100% green electricity will greatly contribute to the airport’s goal. In addition, Prague Airport once again defended its international certification, Airport Carbon Accreditation, which independently evaluates airports' efforts to reduce their carbon footprint.

Prague Airport has been involved in the Airport Carbon Accreditation (ACA) initiative since 2009 and the initiative independently evaluates airports around the world and appreciates their efforts to reduce their carbon footprints under the auspices of the International Airport Association – Airport Council International. Prague Airport, the operator of Vaclav Havel Airport Prague, has achieved the third level of ACA certification, known as optimization, this year. This means working with partners to reduce the carbon dioxide (CO2) emissions associated with the operation of the airport. The airport achieved the third level for the first time in 2016.

“Prague Airport is one of only 16 European airports that is committed to not only reducing the carbon footprint from its operations, but also involves its partners in this effort. The parties involved are airlines, providers of handling and catering services, land transport users, and other partners. In addition, Prague Airport has set itself an ambitious goal. By 2030, it wants to achieve carbon neutrality, which is the highest, the fourth, ACA grade,” commented Vaclav Rehor, Chairman of the Board of Directors of Prague Airport. Airports can achieve this grade by compensating for the remaining CO2 emissions that they can no longer reduce by their own measures by purchasing measures of third-parties, known as offsetting projects.

"This year, we are negotiating the purchase of 100% green electricity, which will help reduce the airport's carbon footprint by 60% by 2025 at the latest compared to 2009, when the measurement started,” said Sona Hykysová, Director of Environmental Protection at Prague Airport.

Achieving carbon neutrality at airports is practically impossible without offsetting projects. That is why the airport is looking at carbon offsetting as part of the solution to the issue of CO2 emissions. The purchase of offsets supports projects that lead to the capture or elimination of greenhouse gases. However, Prague Airport first wants to reduce its CO2 emissions by its own measures, and therefore it is waiting to make the investment in offsets. 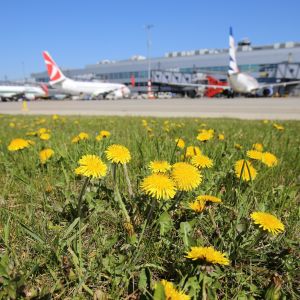