SkyUp Airlines, a Ukrainian low-cost carrier, launched scheduled flights connecting Prague with Lviv and Kharkiv today. Direct flights from Václav Havel Airport Prague to these destinations will be available to passengers twice a week, on Thursdays and Sundays.

The new routes will be operated by Boeing 737-800 aircraft with 189 seats. Today, the SkyUp Airlines aircraft was welcomed with a water salute as its inaugural flight from Kharkiv touched down at Václav Havel Airport Prague, while passengers departing from Prague had drinks and appetizers served to them at the gate.

“We appreciate the newly established cooperation with SkyUp Airlines and welcome a further increase in capacity on flights between Czech Republic and Ukraine. Last year alone, we handled nearly 240,000 passengers on the regular flights between them. I believe that the new routes to Kharkiv and Lviv will be appreciated not only by a large number of Ukrainian passengers, but also by Czech tourists interested in exploring non-traditional destinations. Based on our estimates, we expect to carry as many as 60,000 passengers per year on these routes in both directions,” says Václav Řehoř, Chairman of the Board of Directors of Prague Airport. There are now four destinations in Ukraine that are directly available from Václav Havel Airport Prague. Besides Kharkiv and Lviv, passengers can fly to Odessa and Kiev as well.

SkyUp Airlines has been consistently working on building its own network of international routes since its flight programme was launched in May 2018. “We’ve taken another step towards implementation of our strategic programme aimed at expanding the map of flights from Ukraine’s regions. From now on, it is even easier for Lviv and Kharkiv residents to discover the Czech Republic. Although, the importance of opening Ukraine to the world remains a priority. We’re glad that we can show Czechs Lviv, the centre of Ukrainian traditions, with its baked goods well-known as placeks, coffee, and the old city, and also to introduce them to Kharkiv, a city of students, the architecture of the Soviet avant-garde and modernism,” says Yevhen Khaynatsky, CEO of SkyUp Airlines.

Tickets are available for purchase on the carrier’s website: https://skyup.aero/en/

SkyUp Airlines was founded in June 2017. Its flight programme was launched in May 2018. The fleet consists of 9 airplanes: six Boeing 737-800 planes, two Boeing 737-700 planes, one Boeing 737-900 ER plane. By the end of 2019, the company intends to expand its fleet to 10 aircraft. SkyUp Airlines flight programme offers about 50 destinations (regular and charter). The percentage of scheduled flights is 55% of the total number of flights operated by the airline on September 2019. As of 1 October 2019, the airline carried 1,567,478 passengers since the launch of the flight programme. SkyUp Airlines’ flight programme offers both international destinations, and domestic flights across Ukraine: https://skyup.aero/uk/our-directions. The airline actively expands the map of flights between the regions. Its list of destinations include Kyiv – Odesa, Kharkiv – Odesa, Kyiv – Zaporizhzhya, Kyiv – Lviv, Kyiv – Kharkiv, Kharkiv – Lviv. The latter will be operated as a scheduled service for the first time in the history of Ukraine. 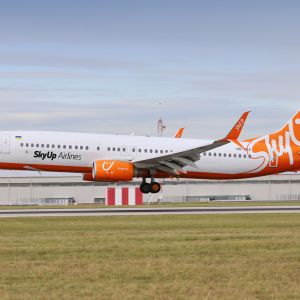 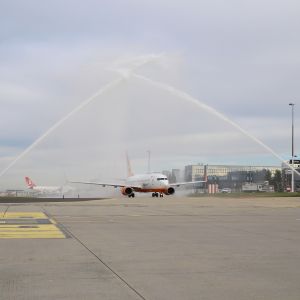 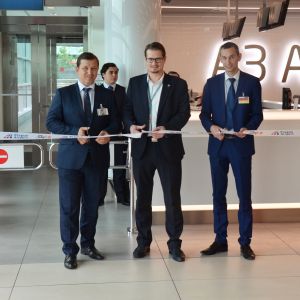