Thank you for protecting yourself and other travellers at the airport by wearing a face mask, keeping a safe distance, washing your hands frequently and using hand sanitizers.
We recommend checking the entry requirements of the country you are travelling to and the measures taken by your airline.

Information on the airport's protective measures can be found HERE

Prague Airport and the National Technical Museum in Prague, working with the Bohemia Aviation Association, have officially introduced a panel photo exhibition commemorating the 75th anniversary of the return of Czechoslovak pilots serving in the British Royal Air Force. The public will be able to visit the exhibition named “Konečně doma! Finally home!” from the beginning of September to the end of November 2020. The exhibition is open to both the general public and passengers in the public area of Václav Havel Airport Prague, in the connecting corridor between both terminals.

Last August marked 75 years since the return of Czechoslovak pilots serving in the RAF during the Second World War from Great Britain to Ruzyně Airport, as it was then called. The new exhibition introduces number of period photographs recalling the arrival on 13 August 1945 and subsequent parades which took place on Old Town Square in Prague on 21 August 1945.

The exhibited photographs come from the archives of the National Technical Museum in Prague and the family archive of the Nedělka family.

The exhibition was ceremonially introduced during an official commemorative event on Saturday, 15 August 2020. On the same day, two British DH82 Tiger Moth training biplanes and, after 75 years, a Spitfire Mk.XVI E fighter flew over the airport. This important anniversary was also commemorated by the pilots themselves with a wreath laying ceremony at the monument dedicated to the important event in August 1945. Prague Airport also proudly joined in commemorating this historic event with a programme of one of the weekends of the Runway Park, which was opened on the former runway 22 during the summer. 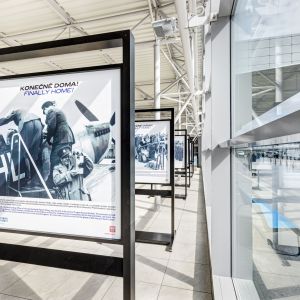 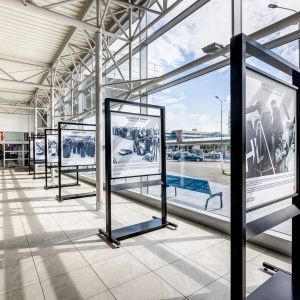