As the name implies, Airport CDM is about partners working together and making decisions based on more accurate and higher quality information that has the exact same meaning for every partner involved. An opportunity for optimal use of resources, improved punctuality and predictability is the result.

This goal can be only be reached by very close collaboration among all partners involved in the management of flights. These partners are: 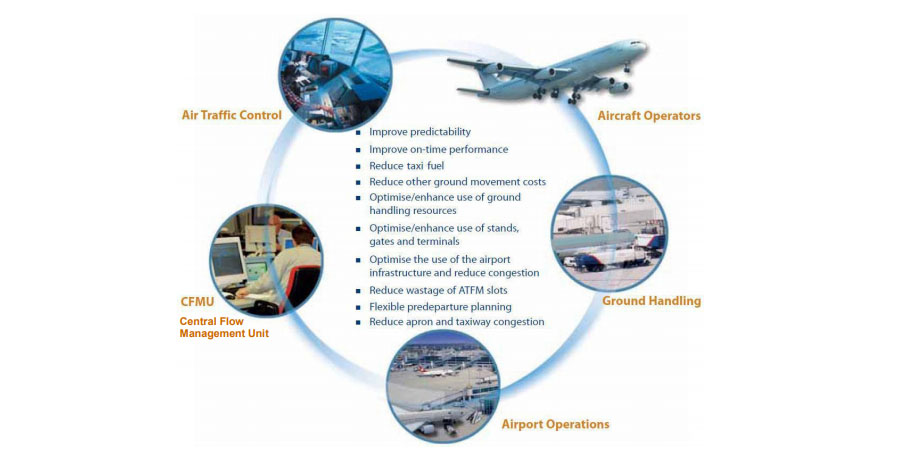 In the absence of Airport CDM stakeholders may make conflicting decisions as the result of lack of information or the receipt of information that has diverging meaning to different partners. Ad hoc addressing of these shortcomings individually may bring improvements but benefits for the whole system can be gained only when the whole complex set of issues is addressed in its totality. For example, a blockage of the airport access road can have a major impact on the number of passengers late for check-in. CDM stakeholders shall be informed about this.

As a result, CDM is considered to be an important approach for optimization of limited assets utilization (i.e. runways, aircraft stands, departure slots). Apart from that it aims to provide better flexibility to airlines in order to maximize their own effectivity and flight punctuality.

The A-CDM concept is an integral part of both the Dynamic Management of the European Airspace Network (DMEAN) and Single European Sky ATM Research (SESAR) programs. It is also actively promoted by the sector associations of airports (ACI Europe), air traffic control companies (CANSO), and airlines (IATA). Together with IATA and ACI Europe, Eurocontrol has developed a special website dedicated to Airport CDM: www.euro-cdm.org.