Thank you for protecting yourself and other travellers at the airport by wearing a face mask, keeping a safe distance, washing your hands frequently and using hand sanitizers.
We recommend check the entry requirements of the country you are travelling to and the measures taken by your airline.

Information on the airport's protective measures can be found HERE

On the occasion of the 100th anniversary of KLM Royal Dutch Airlines, a surprise was prepared in cooperation with Letiště Praha for passengers on the afternoon flight KL1356 from Prague to Amsterdam today, on Monday 7 October 2019, the exact date of the airline’s “birthday”. Refreshments were prepared for them at the departures lounge, where the representatives of the Prague Airport, KLM and the flight crew personally cut the birthday cake.

KLM is the oldest airline in the world, operating under its original name – Koninklijke Luchtvaart Maatschappij, abbreviated to KLM – for the full 100 years of its existence. KLM is currently focusing on sustainability, social media and technologies in the context of air transport and, most importantly, on the customer. KLM is aiming to be the most innovative and efficient airline company in Europe, offering its passengers reliable services and products of the highest quality.

“KLM Royal Dutch Airlines started operating scheduled flights to our airport immediately after its opening in 1937 and has been one of our long-term major partners. Over the course of the last ten years, we have seen the great success of the flights between Prague and Amsterdam, with the number of passengers transported growing by approximately 240%. We wish KLM to continue this success for at least the next one hundred years,” said Václav Řehoř, Chairman of the Board of Directors, Letiště Praha.

Initially, KLM cooperated with Československá letecká společnost (ČLS) on flights between the airport in Prague-Kbely and Amsterdam. On 1 April 1935, KLM started flying the Amsterdam-Rotterdam-Essen-Mühlheim-Halle-Leipzig-Prague route with a frequency of three flights per week, using the Douglas DC-2 Dakota aircraft. KLM has been using the airport in Prague-Ruzyně since April 1937. For a few years, Prague was part of the Blue Danube Express route (Amsterdam-Prague-Vienna-Budapest).

Today, KLM Royal Dutch Airlines offers 28 flights per week on the route from the Václav Havel Airport in Prague to Amsterdam with a capacity of up to 4,100 seats. KLM uses the Boeing 737-700, Boeing 737-800 and Embraer 190 aircraft on these flights. 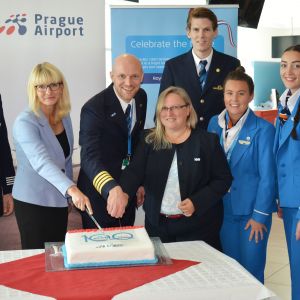