The emergency drill of an air accident is over. It successfully inspected all components of the airport

A joint exercise of the airport's rescue, security and operational units was successfully held at Václav Havel Prague Airport today. They intervened in the event of an aircraft landing accident and checked the follow-up activities according to the procedures of the Airport Emergency Plan. The exercise was also attended by the Police of the Czech Republic and the Association of Samaritans of the Czech Republic. The airline Smartwings, which lent one of its aircraft for purposes of the exercise, took part as well.

The subject of this year's exercise was an intervention in a crashed aircraft, including rescue and firefighting performed by Prague Airport units, including specific procedures for identified dangerous goods on board.

"We sent four emergency specials to the scene of the accident, a total of eight airport fire trucks took part in the exercise and 18 firefighters. We confirmed the fast range, we checked the intervention to extinguish the burning engine of the aircraft, the crew's reaction during the evacuation, the activities of the fire brigade in the evacuation of passengers and the cooperation of units at Prague Airport," says the exercise commander Zdeněk Čelikovský.

In the next part of the exercise, the activation of the group for removing stationary aircraft from the operating area was examined. The exercise took place during full operation of the airport and did not affect the smooth check-in of passengers or the normal flight schedule of the airport.

"We have confirmed our ability to react and intervene very quickly in the event of an aircraft accident and to cooperate perfectly with other units in the event of an emergency," confirms Zdeněk Truhlář, Strategy and Safety Management Manager.

Statistically, air accidents are very rare. However, large international airports must be prepared for such event. That is why we organize an emergency exercise of an air accident at least once every two years. The last time was in April 2019. However, there are number of smaller emergency drills and they take place at the airport throughout the year.

"For the airline, this type of regular exercise is an essential part of crisis and security plans. Participation in the exercise contributes to the company's maximum preparedness for various crisis situations and confirms the high level of operational safety and crisis management of the airline," says Roman Vik, Member of the Board of Directors and CEO of Smartwings.

Smartwings has repeatedly successfully passed audits in accordance with IOSA (IATA Operational Safety Audit) standards. A valid IOSA registration is considered in commercial air transportation as proof of the airline's reliability and high level of safety. 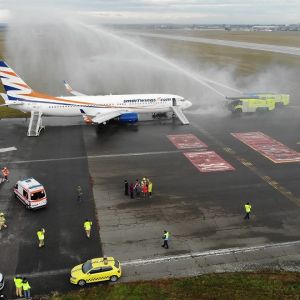