Effective the upcoming winter season, Ryanair will launch a new direct route to Naples, Italy. Flights from Prague will be available up to four times a week, on Mondays, Wednesdays, Fridays and Sundays. At the same time, the carrier plans to resume flights to additional destinations, such as Barcelona, Billund, Paris Beauvais Airport and Manchester. In winter, the airline will thus offer connections to a total of 28 destinations from Václav Havel Airport Prague.

Tickets for all flights are already available for purchase via the carrier’s website www.ryanair.com.

In addition to the new announced destination, Ryanair prepared one more pleasant surprise for its passengers. The carrier used a brand-new aircraft to service its morning direct flight from London Stansted Airport to Prague, namely an aircraft called Boeing 737-8200 ‘Gamechanger’. This version of Boeing 737 MAX, with the EI-HEZ registration mark in the colours of the Irish carrier, appeared in Prague for the first time. Ryanair has ordered more than 200 of these aircraft, each of which offers 197 seats, reduces fuel consumption by 16% per seat and lowers noise and CO2 emissions by 40%. 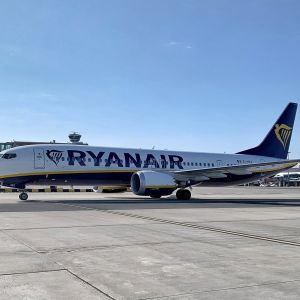