Watch livestream from Vaclav Havel Airport Prague thanks to a camera located directly on the runway 06/24.

The 3,715 metres long main runway features a radionavigation system, which provides aircraft with landing guidance in both runway directions even in case of adverse weather conditions (e.g. low visibility). The runway dimensions allow the world’s largest airliners to land in Prague, such as the Airbus A380, Boeing 747 (Jumbo), or the most modern types Boeing 787 (Dreamliner) or Airbus 350. Prague Airport records on average 400 takeoffs and landings each day.

In the years 2012 and 2013, the main runway 06/24 underwent a general overhaul. A total of 300 thousand tons of concrete, asphalt, and gravel were dismantled and replaced by nearly 200 thousand tons of cement-concrete cover, which would be enough to cover 19 km of a four-lane highway. Along with the general overhaul, the safety lighting system was reinstalled and the sensors reporting icing were also replaced. A part of the taxiway system (taxiways A and D) connecting the apron at the terminals with the main runway has also undergone repair work. Furthermore, the taxiway E has been extended to accommodate the largest aircraft such as the Airbus A380 or the largest cargo aircraft Antonov An-225 Mrija.

Václav Havel Airport Prague also has a fully functional runway 12/30 known as the alternative runway, which crosses the main runway in front of a spotting platform opposite Terminal 2.

There are approximately 70 airlines landing at Václav Havel Airport Prague during the year. This number changes depending on the summer or winter season, as well as on the increase of flight connections from Prague (introducing new lines).

Each airline is assigned a corresponding code and a call sign, so every flight has its own number. When communicating with air traffic controllers, pilots use a call sign consisting of the airline’s call sign and a flight designation. The designation is frequently identical to the flight number you will find together with the airline code in the flight schedule, on the ticket, and on the departure and arrival boards at the airport. For example, the CSA line from Prague to Seoul is marked OK190 and pilots use the code CSA190 for communication. However, sometimes the flight’s call sign differs to prevent misunderstandings in the broadcast.

Each airline creates its flight numbers according to its own rules, but in general, the number combination ranges from 1 to 9999. It is a common practice that flights to the north and east are assigned even numbers; however, sometimes airlines assign lower numbers for departures and higher numbers for arrivals.

In general, the lower the flight number, the more important the flight is to the airline. The flight Delta Airlines DL1 from New York JFK Airport to London Heathrow (LHR) is an example of such importance. Certain number combinations are not used as flight numbers to avoid confusion with the type of the aircraft, such as 757. Numbers with a certain meaning, e.g. 13 or 666, are also not used unless it is a well-thought-out marketing plan. In 2017, Finnair operated a flight to Helsinki marked as HEL666, which on top of that flew on Friday the 13th.

The following table shows a list of airlines that fly regularly to Václav Havel Airport Prague along with the current colour of their aircraft.

Zobrazit celý text
Below you can see a list of airlines flying to Václav Havel Airport and their liveries.*

* photos are for illustration only

AIRCRAFT TYPE AND HOW TO RECOGNIZE IT

We can categorize modern airliners into short-haul, medium-haul and long-haul aircraft. The largest of them, such as the Airbus A330, A350 and A380 or the Boeing 747, 777 and 787, operate on intercontinental flights. They are often 8 or more hours in the air and fly across the globe. There are 2 aisles inside and they can accommodate more than 250 passengers. The most frequented aircraft on the market, Boeing 737 and Airbus A320 in various variations, fly on medium-haul routes (from Prague they fly most often to Europe and to the neighbouring parts of Asia and Africa). Jet Airbus 220, Boeing 717, Canadair CRJ, Embraer 170/190 and Sukhoi SSJ100, as well as turboprop ATR 42/72 and Dash-8 fly short to medium-haul routes.

Today there are two largest aircraft manufacturers on the market – American Boeing and European Airbus. These competitors produce machines for all types of flights, from regional to intercontinental.

Boeing is an American company with a long history in aviation. Currently, it supplies aircraft 737, 747, 767, 777 and 787 and of course business jets. The latest machines developed by Boeing include the Boeing 737 MAX or the Boeing 787-Dreamliner in versions 8, 9 or 10, which differ in size. At the same time, Boeing employees are working on the development of a new type known as 777X, which completed its first flight in early 2020. Nowadays, more than 10,000 Boeing aircraft are used worldwide, accounting for almost half of the total amount of all airliners in operation.

The main competitor of Boeing is a Toulouse-based company Airbus. According to available information, Airbus has delivered more than 11,000 aircraft to various customers worldwide. The company offers narrow-body aircraft for short-haul routes, as well as wide-body aircraft designed for long-haul flights. The Airbus portfolio includes, for example, the A220, originally developed by Bombardier, the A320 (A319, A320, and A321), and various A330 versions. Airbus has also developed the iconic A380, which is the world's largest airliner. The new generation is represented by upgraded versions of the A320 aircraft marked neo (new engine option). Nowadays, passengers can fly on the Airbus A320neo, the best-selling aircraft so far, the A321neo or the A330neo in various configurations. The most modern machine developed by this manufacturer is currently the long-haul Airbus A350 and an A321 XLR with an extremely extended flight range, which will be launched in the future.

There are also other airliner manufacturers on the market. Another company worth mentioning is ATR, a consortium of French Aerospatiale and Italian Alenie. The company’s name is an acronym of “Avions de Transport Régional“, or “Aerei da Trasporto Regionale”, both meaning “Regional transport aircraft”. Today we can come across two types of this aircraft – the ATR 42 and the ATR 72. The numbers 42 and 72 usually denote capacity, although nowadays these airplanes accommodate 4 to 8 more seats. Both airplanes feature turboprop engines reaching a cruising speed of about 550 km/h and flight range more than 1,550 km (they are designed for short to medium-haul regional flights).

A Canadian manufacturer Bombardier Aerospace might be a turboprop competitor to ATR. It produces a Dash 8-Q 400 which is considered to be the most modern, fastest turboprop airliner. Its cruising speed is more than 660 km/h and flight range over 2,500 km, characteristics quite comparable to jet aircraft in many factors.

Since 2017, Bombardier Aerospace has been a part of the Airbus Industrie corporation. It manufactures aircraft for medium-haul flights such as the Airbus A220-100 and the Airbus A220-300. Another manufacturer – Embraer – is now joining Boeing. With this step, the company has expanded its portfolio of small aircraft, which it so far could not offer to its customers.

Our services for your convenience journey 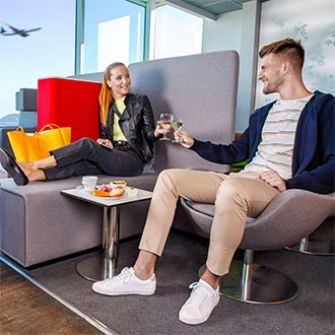 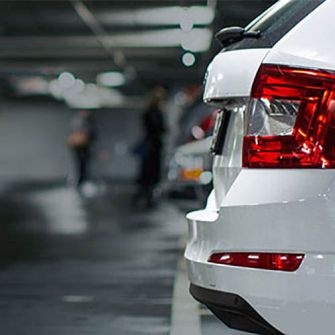 directly at the airport

in a new modern design 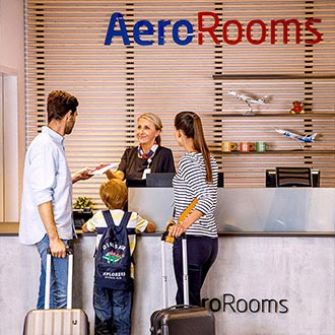 hotel directly at the airport 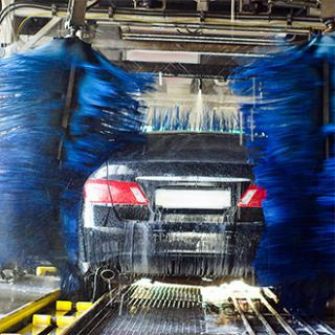 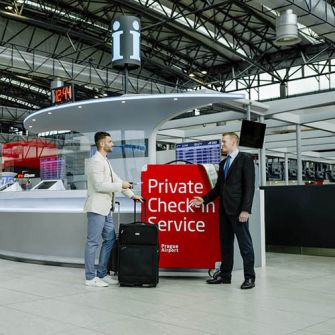 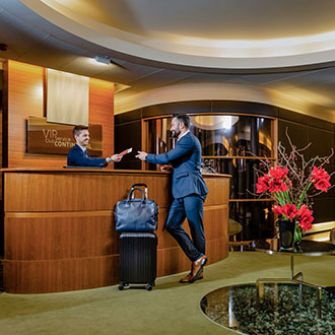